On the 3rd of July, 1886, a public meeting was held to discuss the building of a public hall in Canungra. Three trustees were elected to oversee the project, they being Mr J. E. Payne, Mr H. J. Delpratt and Mr John W. Lahey. The original Canungra School of Arts was completed late in 1886 by Louis Howells for the Lahey Brothers, owners of the (then) new Canungra Softwood Mill, begun in 1884. In May 1887, a committee was formed with the intention of managing the hall for the benefit of the community. They were: J. E. Payne, A. Jerome, J. H. Delpratt, J. Scarborough, E. Franklin, J. Duncan, C. Marks and J. W. Lahey. At this meeting, it was decided to buy a piano and several lamps for the building. The Hall was constructed on the west bank of the Canungra Creek, and used as a recreation centre by both local families and the many single mill workers. This hall was constructed of Hoop pine, a timber found to be quite palateable by the white ant population.

The official opening ball (the Jubilee Concert Ball) was set down for the 24th June, 1887. Admission was 5 shillings a single ticket, 7 shillings and 6 pence for a double.

By 1887 there were enough children in the district to warrant asking the Department of Public Instruction to supply a teacher. This was achieved, and the Canungra Upper Provisional School was opened in the School of Arts Hall in January 1889 by Miss Julia Gleeson. Unfortunately, she requested a transfer in October 1890 as there were not enough pupils to keep up the required average to pay her a suitable wage. This was often brought about by flooding in the nearby Canungra Creek, as there were no bridges in those days.

By 1889 the Hall had been almost eaten by white ants, and although minor repairs were attempted, something more permanent had to be done.

The School of Arts building was moved into town by Walter and Albert Curtis in 1900. It was used as a school for only a short time as a new school was opened off Finch Road on land bought from Mrs Duncan. This left the hall to be used for its original purpose, that being recreation. The town at the time boasted a brass band, an orchestra and various performing groups with the occasional vising “entertainment troop”.

In 1912 the local community built a much larger and rather elaborate new School of Arts hall in the Gothic style on the site of the present hall. This hall was planned and built by Mr Day and Mr Parkinson. This building had proper stage facilities etc, and was the centre of the town’s social life. The hall was dedicated as a Memorial Hall and housed an Honour Roll with the names of the locals who had served in the Armed Forces during WW1. (The Honour Board was unveiled by the Queensland Governor, His Excellency, Sir Matthew Nathan, on 17 June 1922). By 1919, Mr H. D. Franklin was regularly showing silent movies, to the accompaniment of Mrs Page on piano until ‘talkies’ took over in 1933. Electricity was installed in 1934. Sadly, this hall burned to the ground on the 3rd of March 1946. The cherished Honour Roll was lost in the fire. This was a disaster for the town in many ways. 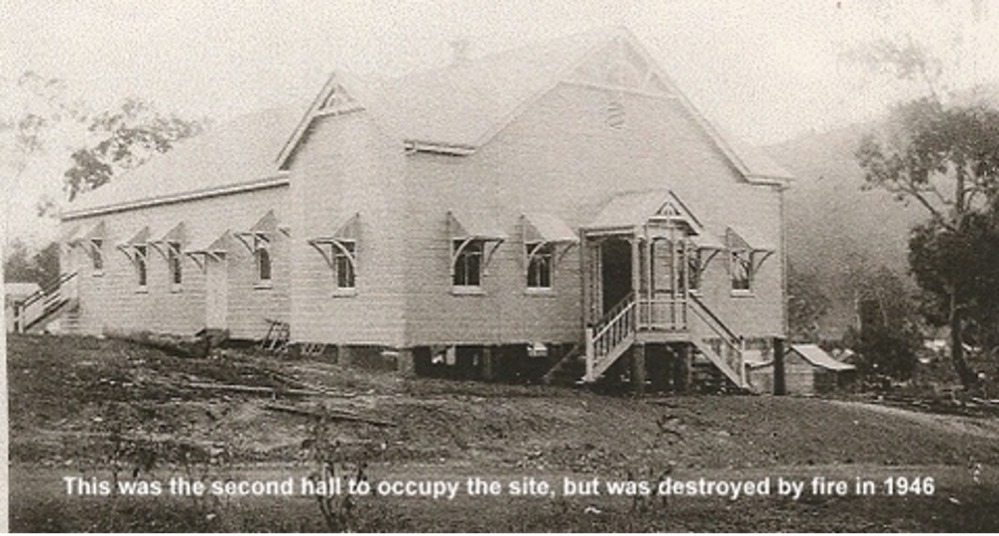 The void was filled by bringing a temporary hall from the then dispersing United States Army at Camp Cable near Logan Village. This was built on land now a car park adjacent to the hall, and for the next 10 years the temporary building was the hub of the towns entertainment. Some older, long term residents will remember the dances, the balls (for instance, the Jubilee Ball with magnificent costumes and beards, and photos in the Womens Weekly), the concerts organised by Mrs Page and Mrs Reilly, and the swinging and swirling skirts at the square dance nights. This hall was meant to be a temporary facility until a much larger and more permanent structure could be built. Soon, efforts began to accomplish just that.

As well as the work and dedication of the businesses and families of the district, two temporary residents took it upon themselves to get involved and assist the project. They were Gerry Germain, the local Police Sergeant, and Les Emmett, the Commercial Bank Manager who was able to provide valuable and much needed financial advice. Fred Quiell, a carpenter from Southport was contracted to build the new hall. Mrs. Page and Ken Reilly organised concerts to help fund the building.

Some of the timber milled from a single Silky Oak tree in the local Sports Ground was used to construct the main front doors as well as other parts of the hall. The Crows Ash timber for the dance floor was milled from three trees, two from properties at Pine Creek (owned by Eddy Rowe and Jasper Jerome), and one from near Lamington, owned by Romeo Lahey. The logs were cut at weekends by Jesse Daniels, Terry and Phillip (Pip) Mahony at Archie Bobermien’s sawmill near Logan Village. The 1″ (or 25 mm) thick sawn timber, already weathered for several years before cutting, was then brought up to Canungra on Sunday afternoons for the carpenters to use during the week. The project slowly took shape, and by mid 1956, had been fitted out, and was ready to be opened. This is how the hall looked from 1956 until March 2011. The car park above the hall was added about 2006.

The Opening Ball was held on Saturday the 7th of July, 1956. This occasion demanded that both of the towns dance orchestras played alternately throughout the night, so that the dancing was continuous. This was a necessity, as the huge numbers present did not allow everyone to be on the dance floor at the same time. One orchestra comprised Mrs. Madge Page on piano, Bill Page on drums, Keith Page on saxaphone and Wally Row on the tenor sax. The second orchestra was made up of Charlie Taylor on piano, Bill Pidd on the fiddle and Harvey Mahoney on accordian. MC for the evening was Jesse Daniels (Snr). 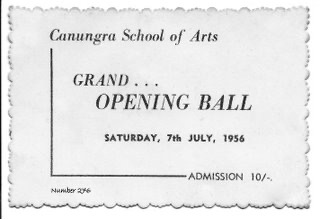 As was usual during supper, the caretaker of the hall, Frank Pragnall, would sweep the hall (usually with the assistance of a volunteer or three), and lay a sprinkling of fresh “Pops” (a little like sawdust) to ensure the dance floor surface was as fast as possible. This hall boasted one of the best floors in the district, being made from narrow plank Crows Ash. A favourite with the locals was the annual Bullocky’s Barn Dance, attracting dancers young and old from all parts of the district. With so many in attendance, supper was provided in the old hall, where the car park is now situated. 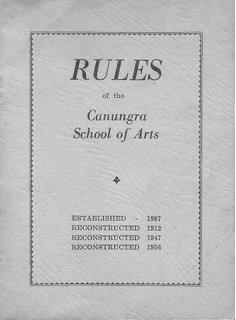 The hall continues to this day, and between November 2010 and February 2011, the building received a major upgrade to the entrance, carried out by Lindsay Ludwig. The steps and porch were replaced, new cladding to the front walls to match the rest of the building, vertical teak timber to the walls containing the original, and now restored Silky Oak doors, and new Colorbond roofing designed to cover the entrance porch and steps. The hall crest is mounted high above the steps.

In September 2011, a new Colorbond roof was installed. The hall committee was assisted by a gratefully received grant from the Jupiters Casino Community Benefit Fund. Almost immediately, it was realised that Gutter Guard was needed to prevent leaves blocking the new gutters and downpipes, and this was installed in November 2012.

In November 2011, the last of the kitchen modifications took place, with the upgrading of the cupboards and workspaces. Hirers now have ample bench preparation space and room to move. With a large cold room and serving bar in place, this hall can accommodate almost any function.

June 2013 saw the hall receive some much needed paint on the outside walls. Luke Russell of Rusty’s Painting Contractors was awarded the contract, and the hall looks vastly better for it.

Wood slats to enclose the underside of the hall were installed in May 2014, with the timber being donated by a prominent family of the district. These were painted in October 2014, again by Luke Russell.

The next project saw fitting of “Emergency Exit Panic Bars” to all 4 side exit doors of the hall, of a type similar to those fitted to the main doors during the front facade rebuild. A gratefully received grant from the Queensland Country Credit Union, Beaudesert Branch allowed this project to be completed in July 2014.

As far as we can tell, the floors had not been sanded or treated since the hall was built. In the early days, regular dancing would keep the floor surface smooth and clean. However, in recent times, the floor had become very stained, with some boards starting to lift at the edges. The dance and stage floors needed to be sanded back and then sealed to prevent drinks and food scraps from leaving unsightly marks, and to make the floor safer for younger users. A very generous grant received from the Jupiters Casino Community Benefit Fund allowed the project to go ahead in January 2015. The finished floor is magnificent, and our sincere thanks to Ben Lown of ‘Top Floor Finishing‘ for all his hard work.

In an effort to reduce water usage, push on, timed flow taps have been fitted to both bathrooms.

The hall interior has been re-painted, and once again Luke Russell was selected to carry out the project. This was completed on 17th April 2015.

An auditorium stereo PA sound system (Public Address) has been installed. The system includes a Bluetooth facility, wireless microphone, 6 channel mixer and an instrument input/output. This was an often requested facility, and is now available to users of the hall for all functions etc.

The front gardens have been given a make-over, utilizing very drought tolerant plants. The backdrop plant is the Strelitzia or Bird of Paradise, and the foreground plant, native to East Asia and Japan is the Nandina Domestica, commonly known as the Heavenly Bamboo or Sacred Bamboo.

Our final project was to modernise the bar room, including new counter tops, shelves and work spaces. This included supplying hot water to new mixer taps over the wash sink and both ice wells, and safety rubber matting on the floor. Following the fitout, the room has been painted. The Silky Oak bar slab was generously donated by the committee of the Canungra Sports and Recreation Grounds to mark the 60th Anniversary of this hall.

In summary, the hall is an impressive, well designed, maintained and utilised multi-purpose venue that will continue to support the local and wider community for a very long time to come.

If you would like to use the hall, please see the calendar on the front page for availability, then contact the Bookings Officer.

The residents of Canungra have a facility of which they can be rightly proud.

The Hall Committee is indebted to Joyce and Des Libke, and to Cath Marsden for making available considerable documentation, photographs and other memorabilia for inclusion on this page.

We are very grateful.